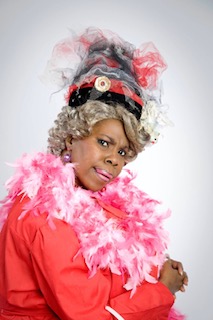 Sherre Bishop, aka comedienne Sistah Willie Ruth Johnson, is a different kind of comedienne and speaker. She builds bridges with no hammer, just words. Whether it’s speaking to transform lives or sharing comedy, her ministry connects people with happiness. Sherre probably got more “time-outs” than any school-age child in America, but it was obviously part of a Supreme plan, as she now gets paid to talk.

When not speaking as herself, she becomes her alter ego, America’s beloved big mama, known as “Sistah Willie Ruth Johnson.” The wacky, big mama uses the platform to spin a rib-tickling brand of comedy, peppered with wisdom and the ministry and medicine of laughter. Sistah Willie Ruth Johnson hails from the fictional city of I-be-darn, Alabama. She’s been traveling through the US performing comedy sets and dramatic performances since 1996.

Sherre is a native of Nashville, TN, with a 40-year career in broadcasting. Her extensive background in TV and radio news includes stints in multiple markets and as a local stringer for Washington-based BET News. She holds a B.S. in Speech Communication & Theatre and a masters in English from Tennessee State University, and a Th.B. in Bible Theology from American Baptist College.